It was a game full of ups and downs.  The Astros seemingly couldn’t shake the Cubs, who rallied to tie the game at 6-6 in the bottom of the fifth inning.  The Astros’ Roy Oswalt was cruising when he left the game with a strained lower back, prompting a bizarre announcement less than a full inning later: That Bud Norris will be joining the big league team.

Houston finally pulled away in the final frames to win 11-6, but it didn’t come without a price.  Oswalt’s back injury could result in significant lost time.  It was announced that Wesley Wright, who came on in relief, had been taken to the hospital after the game due to dehydration.  It then was announced that he may miss some time with appendicitis.  The hits keep coming, even with the younger guys. 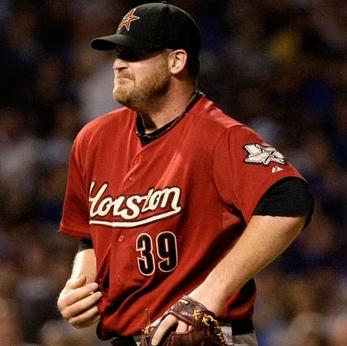 Fulchino gives up a hard-luck hit.  By losing the ball in his shirt.

There were highs, as well.  Wright and Jeff Fulchino, another reliever, each recorded their first Major League hits.  Jeff Keppinger got 4 hits in a game for just the third time in his career.  Fulchino looked very good despite giving up 3 runs in as many relief innings.  Jose Valverde looked good.

But the post-game news is all ominous.

It’s not often that Astros fans are universally thrilled to see a minor leaguer get called up, but Twitter was abuzz with excitement over the Bud Norris era.  David “Bud” Norris was the second-rated prospect in the Astros’ system, and left an indelible impression during Spring Training.

Norris hasn’t pitched a single inning of relief since 2006, when he was with the New York-Penn League’s Tri-City ValleyCats.  Of the pitchers currently on the roster, Chris Sampson and Fulchino seem the likeliest competitors for a starting spot.

It seems unlikely that Cooper – who seems to have a hatred for any player under the age of 30 (Norris is 24) – will give him a shot at the rotation immediately.  But so little has worked there so far this year, it seems like it’s easily the best place for him right now.

Meanwhile, Around The Division…

The St. Louis Cardinals took advantage of Houston’s big win by pounding the Los Angeles Dodgers, 10-0, to take control of the division by a half of a game.  Houston and St. Louis were the only NL Central teams to win yesterday, affording the Astros a few games over Milwaukee for third place.

Round Rock Express (AAA) – Bud Norris was in the stands, tracking pitches, when he was told that he would be called up to the Major Leagues.  He probably couldn’t have been more excited – but I’m a bit worried about the fatigue on his arm.  Not from pitching, but rather from tracking the 178 pitches it took the Express pitching staff to get out of this hideous 14-5 loss to the Memphis Redbirds (STL).  Polin Trinidad managed to give up more home runs (6) than innings pitched (5), which is some kind of feat.  Jared Burton struck out zero batters in 1.2 relief innings, gave up 8 hits, 3 walks, a home run, and 5 earned runs to watch his ERA climb to 13.50 in his only 3 Triple-A games.  Khalil and Tyler Greene each had two home runs for the Redbirds, as did Allen Craig.  It doesn’t really help matters that Trinidad had a home run of his own, but it does give a glimmer of hope that 1B Mark Saccomanno did, as did OF Yordany Ramirez.

Corpus Christi Hooks (AA) – Brad James couldn’t shake a bad start, earning the loss in a 5-4 decision to the San Antonio Missions (SDP).  The first four runs he gave up were made up for by the offense, but when he gave up a fifth run in the seventh inning, the offense went silent.  Strong innings by Chia-Jen Lo and Charles Weatherby III didn’t help, as the bats stopped working.  OF Collin DeLome belted his 17th home run of the season, and OF Nicholas Moresi was 2-for-4 with a triple.  2B Drew Meyer was also 2-for-4, with a double.  C Jason Castro had a night to forget, going 0-for-4 from the cleanup spot, with two strikeouts and a passed ball behind the plate to boot.

Lancaster Jethawks (A+) – Down 8-3, the Lancaster Jethawks rallied to put 4 runs on the board in the bottom of the sixth inning.  Down just a run with three innings to go, things looked very good – but this is baseball.  Specifically, this is Astros baseball, and they were unable to score a run for the remainder of the game, losing to the High Desert Mavericks (SEA) 8-7.  High Desert 1B/OF Joseph Dunigan belted a home run to edge closer to Jonathan Gaston‘s league lead, but still trails the Lancaster outfielder, 28-24.  OF T.J. Steele was the highlight of the Jethawks’ evening, going 3-for-4, a home run short of the cycle, to raise his average to .354.  His line now stands at .354/.395/.586.  If he can learn to draw some walks, he could become a major leaguer within 2 years.

Lexington Legends (A) – The Legends could just never get it going, losing 6-2 to the Hagerstown Suns (WSN).  SS Brandon Wikoff was 2-for-4, as was OF Steve Brown.  Not a whole lot of good to speak of from the Lexington pitching staff, which is rare, but Hagerstown’s Marcos Frias looked quite sharp at times, striking out 6 batters in as many innings.

Tri-City ValleyCats (A-) – I still hate the Lowell Spinners (BOS), and a 9-3 win by the ValleyCats to ensure at least a series split was just what the doctor ordered.  Wander Alvino never dominated in his 6 innings of one-run ball, but pitched well enough to earn the win.  Robert Donovan struck out 4 in 2.1 innings, and allowed a single walk and no hits or runs for his fourth save of the year.  OF J.D. Martinez continued to impress, going 5-for-5 with a double and 2 RBI, raising his season line to .345/.375/.586 since his callup from Greeneville, where he was .403/.446/.740.

Greeneville Astros (R) – Greeneville had fallen 1-0 to the Bristol Sox (CWS) in the 4th inning when the game was suspended due to rain.  Gabriel Garcia looked characteristically bad in his 3.0 innings of work, striking out none and allowing one run on 4 hits and a walk.  My favorite part of this box score is the attendance, which I’m hoping is a mistake:

GCL Astros (R) – Mark Jones reminds me of a young Randy Johnson without all that “ability.”  He did strike out 2 batters in the 1.2 innings he managed to get through in his start, but also gave up 5 hits, 5 runs (albeit only 2 earned), a walk, and two wild pitches.  The GCL Mets’ (NYM) starter, Lachland Hodge, looked like Sandy Koufax in comparison, despite striking out 4, walking 1, allowing 5 hits and 4 runs (2 earned) in 5 innings, hitting a batter, and balking – and earning the win in the 10-4 decision.  Finding positives about this game is hard, but that’s what I don’t get paid to do, so OF Emilio King can get his due.  King was 3-for-3, a home run shy of the cycle, and he stole a base and drew a walk.

DSL Astros (R) – The Astros downed the DSL Angels (LAA) 5-4 with a dramatic eighth inning run.  Or so I’m guessing.  I don’t really care much more than you do.  Dieudone Paul struck out 5 Los Angeles Angels of the Dominican Republic in 6 innings, allowing just 2 runs on 4 hits and 2 walks, but walked away with a No Decision after the bullpen first blew the save, then earned the win.  SS Hector Rodriguez had a full night, going 2-for-3, scoring 2 runs, drawing a walk, stealing a base, turning two double plays, and recording his 14th fielding error in 39 games.  If he can learn to field or hit for power, his .307/.378/.388 may just earn him every young man’s dream: A callup to Tri-City.